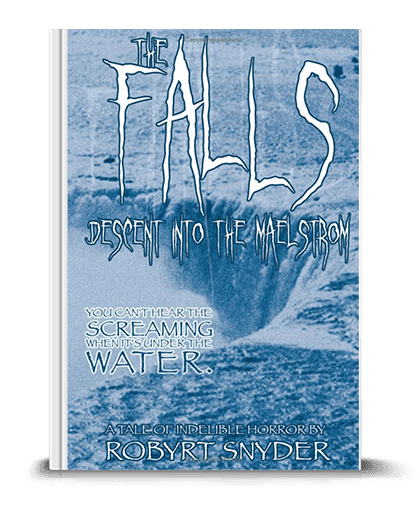 The Falls: Descent into the Maelstrom

What if you could take a real life ride down a turbulent river through raging rapids and over the most famous waterfall in the world? And survive. Maybe. Would the thrill and the rush of adrenaline be worth the danger of such a risky adventure? The Ultimate Thrill Corporation is betting that you would be willing to take just such a risk. And they believe…

Read Excerpt from The Falls

The wind from upriver whipped at her red hair clearing it from her face. She was troubled, no doubt, but even though she held her head down I could see that she was very pretty. That was even better and another point in our favor. I didn’t even need to see the daughter or look at her drug rap sheet to know that she was probably hard core. The pain and worry of such a life was written in the lines of her young mother’s face. The agony of her daughter’s death was mirrored in this woman’s eyes. I had seen that kind of agony in lots of faces before, but they were usually already dead. The lines in the face translated into countless hours in detention halls, police stations and rehab clinics. The eyes represented a recent stint at a morgue and a cemetery.

I’d already decided on an approach. It was risky but I was going with an instinct.

“Hello,..ma’am. Listen I know you don’t know me but my name’s Ro Patric. I’m a river rat. That is I work on the Niagara River. They say that I know the river better than anyone.”

The distraught woman gave no indication that she was aware of my presence.

“Listen ma’am, I don’t know you or what you’ve been through and so I can’t tell you not to do this because I don’t know what you have in your life to live for. But I’m not going to give you the standard crap that life can’t be all that bad. Maybe it is.”

I could feel the detectives of the NFPD behind me rolling their eyes at that one.

“But what I do know is this river and what will happen to you if you let go of that railing. You see all that water next to you, falling. It almost looks soft and pillowy, like a wet cloud, doesn’t it?” And the mist. It’s all sweet and lacy and you just want to let it kiss you with it’s coolness. That’s what this place does. It beckons. Believe me I know. Many a sane person less troubled than you, myself included, has stood at this very railing and felt that very enticement to become one with that web of water, if even for a flicker of a moment. It’s an urging that tugs on primal roots, that’s for sure. For my money, ma’am, this whole place is like a giant spider web.”

For the first, time since I started talking, I saw her stir. She lifted her tear streamed face a little to look out at the Falls.

I continued, “Even with your feet planted on dry land the Falls will try to hypnotize you. It will seem as if it’s message is for you personally. It likes to make you think that it speaks to you alone. But once it gets you in its grasp it rarely lets go. The lives saved from Niagara are countable, the souls lost; uncounted. That’s because only when it’s too late will you realize how diabolical, how demonically apocalyptic it all is. It does not care for you at all. It sucks you into its teeth and whatever is left is spit out the other side. You may have felt that its invitation was highly personal but when it’s too late to escape only then will it let you know that you are merely more fodder for the shredding mill.”

I thought I detected a flicker of fear creep into her eyes overriding the pain and despair for just a brief instant. That expression of fear was not a stranger to me but I say again that it was usually implanted on visages that had ridden the Falls to its natural conclusion.

“Believe me when I say that its mystique will fade faster than a cheap card trick. There is nothing glamorous about dead flies in a spider web or stuck to a strip of fly paper. Don’t let the illusion fool you ma’am. It’s the biggest lie that this place can perpetrate. I make my living down there. I battle this monster every day of my life and also many a night when I’ve had to relive its horror from my bed. I’ve seen just about everything there is to see and it won’t be like what you think it will be. It will not be gentle. Your best hope is that the inevitable will be relatively quick and painless and not even that can be guaranteed.”

The detectives behind me were about to have a conniption.

She had still not uttered a word but I saw her seriously studying her circumstances. She was giving my words the weight they deserved.

I was getting to her and now was the time to strike deep while the iron was hot. I showed her the back of my hand.

“Do you see these scars, ma’am? They form letters that I had burned onto my hand. CYFIC. Those letters were inspired by this river on the day of my very first rescue. It stands for Can You Feel It Coming. I was a young man then and the guy I rescued said it to me and I’ve never forgotten it. I don’t have time to go into all the details now but it means to never underestimate this river because it will COME at you. I screamed when they seared those letters into my skin because I wanted the pain to never let me forget. It’s what’s kept me alive all these years. You’re still a young woman ma’am. Very pretty if you don’t mind me saying, but if you let go of that railing you will experience a side of Niagara that very few get to feel. And when its over I’m afraid your own husband will not be able to recognize, let alone identify, what will be left down there when this river is done with you. You will know firsthand the real ‘glory’ of Niagara. I would suggest that if you really intend to go through with this, that you take your wedding ring off of your hand and swallow it. At least that will giv’em something to go on at the autopsy.”

The woman started to sob. She turned to face the water, took a deep breath and her body tensed, like a coiled spring.

Read it all in The Wycked Falls: Descent into the Maelstrom 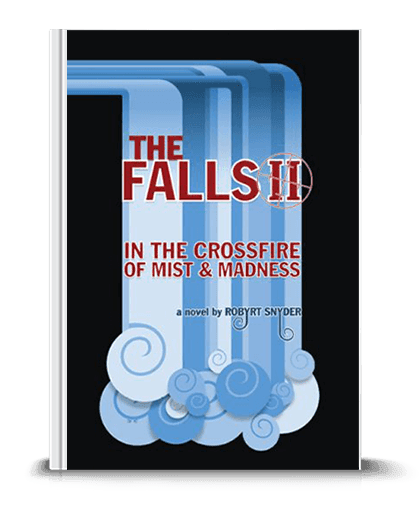 The Falls II: In the Crossfire of Mist and Madness

Former river rat, Ro Walsh has worked on the Niagara River all his life and has seen how its deadly mystique engulfs strangers and friends alike. It is stamped irrevocably on their death faces. Despite an unending feeling that something unnatural exists in the unfathomable void that is the plunge basin at the base of Niagara Falls, Walsh escapes its pull. And his fears…

Read Excerpt from The Falls II

The mistfall was heavier as the boat entered the domain of the great falls at Niagara. Even those who had made the trip year after year never failed to be awed by the sight that surrounded them. Cameras flashed. Stewart gunned the engines again. He was approaching that point in the river where it was not safe to go any farther or risk being taken over by the hands of the current of the Falls.

Maximizing his engines here with the matching pull of the river was vital, so that each force canceled each other out and the boat hung in a state of suspension, going neither forward or back for about thirty seconds. To go any closer or to stay any longer was to invite disaster.

Stewart made an announcement over the intercom, “In memory of our two good friends John Sibbett and Harold Heggart we dedicate these wreathes. May they rest in peace.”

Stinson tossed the wreathes into the turbulent mix that was the Niagara River below the Falls and immediately both flowered circles vanished.

Stewart, for some reason, picked up a pair of binoculars hanging in the pilothouse and put them to his eyes.

Only a devil from the deepest parts of hell where the fires burned the whitest could have planned what happened next. The front glass window of the Maid’s wheelhouse shattered while the two side windows were splattered with blood.

John Stewart slumped forward against the helm of the ship.

The ships engines faltered and began to sputter.

The Maid of the Mist drifted forward into uncharted territory where no ship before had dared venture. Stinson, looking up at the wheelhouse from the bow, could see the broken glass and the blood, but not the captain.

“Oh my God” he screamed as he made a mad dash for the cockpit.

He scrambled by dumbfounded passengers, up a set of stairs to a locked door. Half of the passengers were still unaware of anything out of the ordinary and were continuing to admire the view. The other half had a feeling that all was not right and were furtively glancing around, looking for a source for that feeling.

When Phil Stinson kicked open the door to the pilot’s house and the body of John Stewart tumbled from his seat and onto the floor, some one yelled, “There’s no one driving the boat!” That sent screams of panic from both halves of the passengers.

Stewart’s face was covered in blood, his right eye just a massive hole of torn flesh. Another gaping hole of blood and tissue appeared at the back of his head. The binoculars were still in his hand, the right lens shattered.

Blood and tissue speckled the confines of the cabin and Stinson knew immediately that he would not be able to help the man.

Whether he could help the rest of them remained to be seen. Climbing into the pilot’s seat, he spun the helm as far as it would go to the left. The ship responded slowly but was able to come about only halfway. The engines were still idling and could not be engaged fully until Stinson could get the ship to establish a direction away from the Falls.

He continued to hold the wheel hard over, in hopes that the ship would come about and he could apply full engine power. But they were losing ground and time.

The ship was being sucked into the maws of an unimaginable catastrophe.

Tons and tons of glistening sunlit water crashed with deafening thunder only feet from the the edge of the boat.

People scrambled to any part of the ship that they could reach to stay out of the avalanche of Niagara’s flow. Knowing that they would not survive the crunch of the water’s weight that would descend on them, a number of the yellow jackets began jumping overboard into that boiling cauldron of a hurricane.

Read it all in The Falls II: In the Crossfire of Mist and Madness 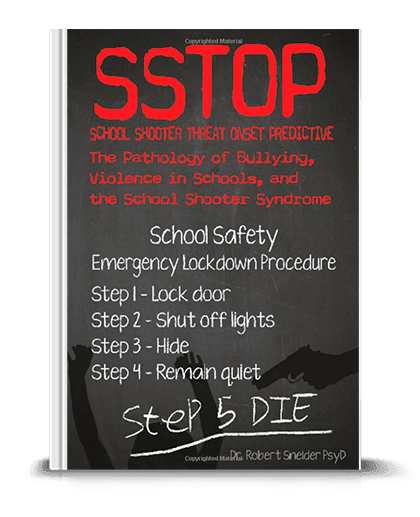 What is the pathology of a bully? How does bullying escalate to violence? Can we predict school shootings? There are plenty of questions, but seemingly few answers that have worked. In his groundbreaking new book SSTOP School Shooter Threat Onset Predictive: The Pathology of Bullying, Violence in Schools and the School Shooter Syndrome...